Seven and I really wanted to show the boys everything about Melbourne that we remembered from the old days. But there’s just something deeply flawed about this idea: kids never want to see the places that are meaningful to you. Why should they? They enjoy discovering places, but they don’t want to revisit places they’ve never been.

So, although we did insist on dragging them to the Vic Market, I don’t think they really appreciated it. They were sort of okay with the fruit and veg; they might have liked the deli section if they hadn’t already been a bit cranky; they hated the meat section; and they only discovered all the non-food stuff when I was so irritated with them that I refused to let them look around.

We had thought about driving the Great Ocean Road, or maybe heading out to the Dandenongs, or even just going to St Kilda, but no, they opted to stay in the flat in Fitzroy watching videos and eating takeout. As we say — whatever. This was where they developed their flashflight photography fetish: 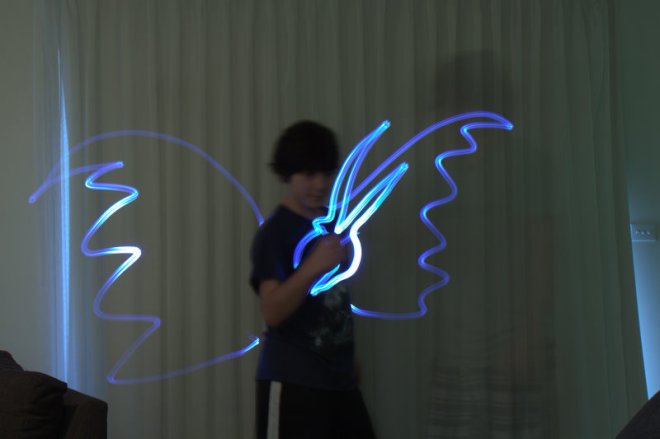 But, lest you think for a moment that this was a kid thing, here is their father throwing a couple of lightning bolts…

It turned out that their exhaustion (which is what I think this was) actually liberated us to do the thing I really wanted to do in Melbourne, which was to catch up with a whole lot of people I hadn’t seen in years — and even then I only saw about half the people I’d like to have seen. So, I spent most of my time sitting in restaurants talking, which is a very Melbourne thing to do (especially in winter, which is what it is now). We did in passing catch a glimpse of some of the parts of Melbourne that have changed, like this curious-looking thing, which, however eccentric, is still an improvement over the Gas & Fuel building that was there when we left. 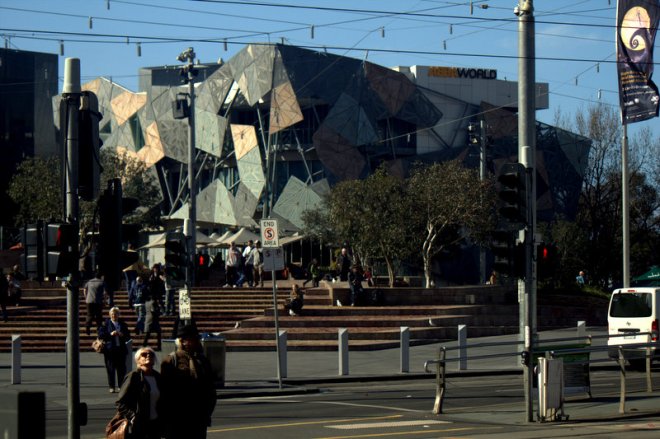 Here is another quite characteristic shot that suggests how “smart” a city it is. I thought it seemed smarter than ever — more and more clothing stores, more and more restaurants, more and more money apparently. (Australia, btw, seems not to have experienced the recession into which we and everyone else in the world were plunged.)

So, you may imagine how glad I was that I had carried my black jeans and my cowboy boots all the way across the South Pacific and thus did not have to appear in track pants and sneakers on the streets of Carlton and the CBD.

There were also, of course, many things that hadn’t changed. Although we did not bother to revisit any of the (many) houses we once lived in, Seven did pop down to the old Dart headquarters. And I was amused to find this photo among the ones that he took. 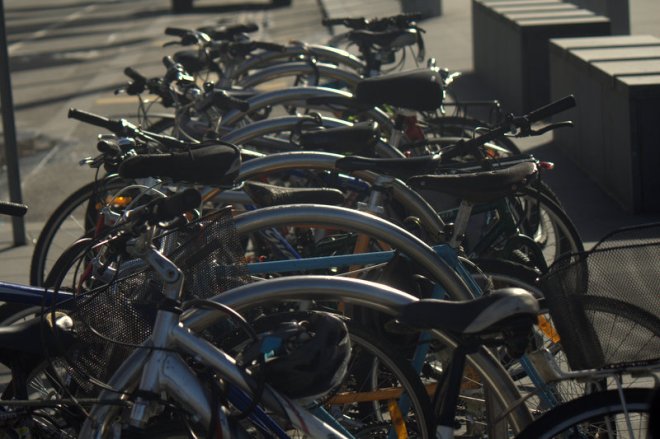 I couldn’t quite decide if this was a little skip down memory lane — back to his many years as a Melbourne bicycle messenger — or a hint of what he’d like to be doing. Seven did bring his tennis racquets along on this trip (they’ve gotten about as much use as my cowboy boots), but the bike was out of the question…though I think he seriously considered it….

Making the Turn: East to Vanuatu

7 thoughts on “Melbourne Revisited (but barely)”