It’s not easy getting from one Pacific Island to another: it seems you always have to go somewhere else first. Getting from the Marquesas to the Tuamotus (which is just the next archipelago over) requires a 3-hour flight back to Tahiti and then a 1.5-hour flight back in direction you just came from to Rangiroa. Likewise, Tahiti to Tonga requires that you fly way south to New Zealand and then back north to the latitude you just left (only a bit further west). It’s all about hubs, apparently. Plus, we are being told that fewer and fewer airlines are flying the Pacific’s less common routes; though I don’t think anyone flew Tahiti-Tonga even in the good old days.

Leaving Vanuatu was another case in point. Our next port of call was Hawai’i but we couldn’t go straight there, so we stopped for a night in Nadi, Fiji. For the uninitiated, one of the peculiarities of the Fijian language is an unindicated nasal: thus “Nadi” is actually “Nandi” — “d” should be sounded as if it were “nd” and “b” as if it were “mb.”

Here we are boarding our plane in Port Vila…

And after this there appears to be a gap in the photographic record (all we did in Fiji was eat and sleep; no, I lie, Seven watched a game of rugby on the television in the bar) until we were confronted — rather shockingly after the places we have  been — with this:

What can I say?  Waikiki and Honolulu in all its glory. The kids were very excited to be returning to America, though I think Seven and I had a little bit of a feeling that the end of the journey was upon us — no more foreign currency, no more curious food. Though, to be fair, there were still some dramatic new sights ahead of us on the Big Island.

Honolulu is another one of those places that, for us, signals “return” rather than “discovery.” It was wonderful to see some of our old friends — dating back not just 12 but nearly 20 years to the time when I was a post-doc at the East West Center.  The irony of our stay, however, was that despite having lived here for a whole year (it’s not that big a place) plus the fact that Seven worked as a — wait for it — AAA dispatcher, we got lost every single time we set out in our rental car. We couldn’t find the road to the old house where we used to live; we couldn’t find the shopping center; we couldn’t find the street we wanted in Makiki; we couldn’t find the entrance ramp onto Highway 1; we couldn’t, in the end even find the rental car agency! We did find everything eventually, but we sure drove around in circles a lot.

Part of the problem I think was that we were staying in Waikiki, a part of town we had never been very familiar with (being, you know, kama aina) and also one that is filled with one-way streets. We stayed in a tiny condo with a great view at the Ewa end of Waikiki, here is what it looked like from the lanai: 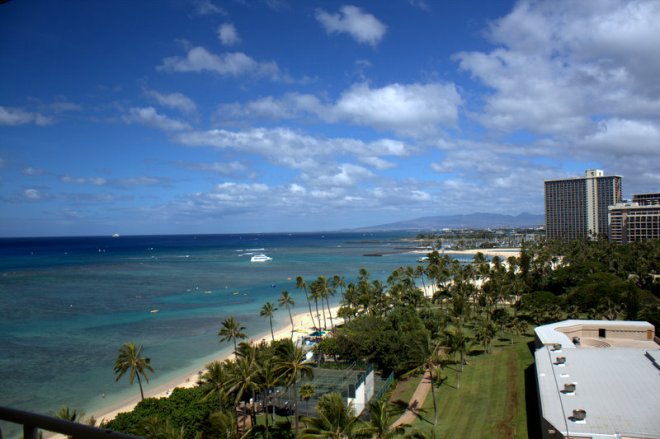 That roof to the right is some kind of Army Museum that we did not manage to visit, despite the alluring helicopter that was parked outside: 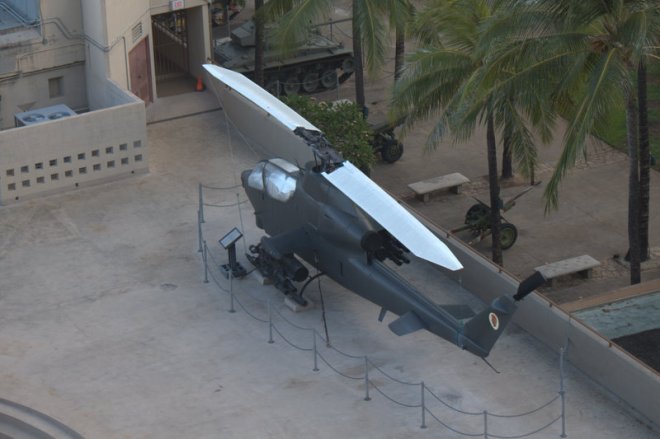 We also made an abortive attempt to see the USS Arizona Memorial at Pearl Harbor, arriving just after the last tour had left. We did get the kids to the North Shore for shave ice (which they said was not as good as it was cracked up to be; though we later found excellent shave ice in Kona) and Seven and I made several trips to the International Market for bead bracelets…

to which I have become addicted….better than vodka I suppose….

One night we attended an entertaining dinner hosted by a friend who works at at UH Press. I think my favorite moment came when, after describing with much comic exaggeration how the University of Hawai’i had declined to hire me back in the 90s, I discovered that almost everyone else at the table was a faculty member in the department in question. We also had an extremely kind invitation to meet various members of the Thompson ohana (no relation to me unless extremely distantly), whose generosity was rivaled only by that of our Tongan friends, and saw some old friends (NZers) who have three girls just about the same ages as our boys. Dani and Matiu were so shy they practically had to be dragged out of the car; mercifully there was a pool table, so no need to make conversation…)

I think what they enjoyed most though was the absolutely wild wind at the top of the Pali — which is the razor sharp ridge at the top of the pass from the leeward (Waikiki) side of Oahu to the windward (Kailua-Kaneohe) — it was like being inside a wind tunnel, as you can perhaps tell from the hair: 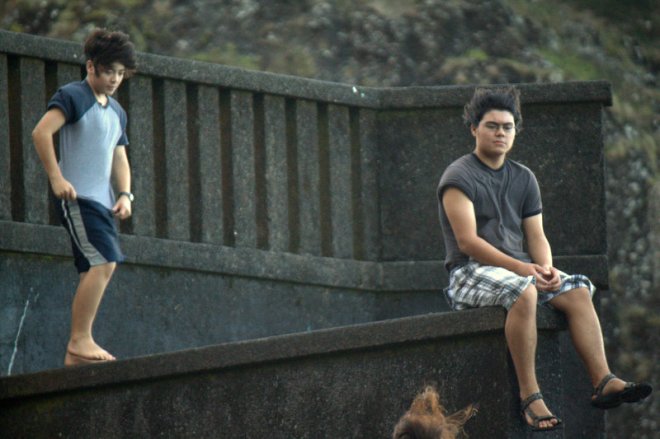 And, finally, here they are in another characteristic posture: poor things, we had the only decent bed and they were relegated to couch cushions on the floor…

The Big Island is Amazing