Five islands (7 if you count the ones we landed on) and 3 archipelagoes later, we have said farewell to French Polynesia. Our last day of travel was pretty challenging. We left Rangiroa around 10 am and flew back to Tahiti where, in a moment of clarity, I had booked us into a hotel. We had to be at the airport at midnight for a 2:30 am flight to New Zealand and originally the plan was just to wait it out somewhere. Fortunately, I realized that this was a really bad idea and instead we went to a hotel with a pool and a restaurant. The room was ordinary enough, but the view from the lobby was impressive.

Abraham and I took a taxi in to Papeete around 4 pm just to have a look around, but when we got there we found that they were hosing down the sidewalks and most of the shops had put up their shutters. The sun sets early in the tropics and we only had about another hour and a half of light. The city had what we both identified as a sort of Saigonesque feel. Of course, neither of us has ever been to Saigon, so I don’t know where we got that idea exactly. But it’s French and tropical and sort of seedily charming. I would have liked more time there but I didn’t much fancy wandering around after dark, so when the sun set we went back to the hotel to catch a couple of hours of sleep.

Well, that was a fond hope. Two single beds, 5 people; you do the math. Dani got a little bit of sleep, and I got a little, but I’m really not sure about the rest of them. Here’s a photo of the boys doing a really good imitation of Zombies at the Faa’a airport around 1 am: 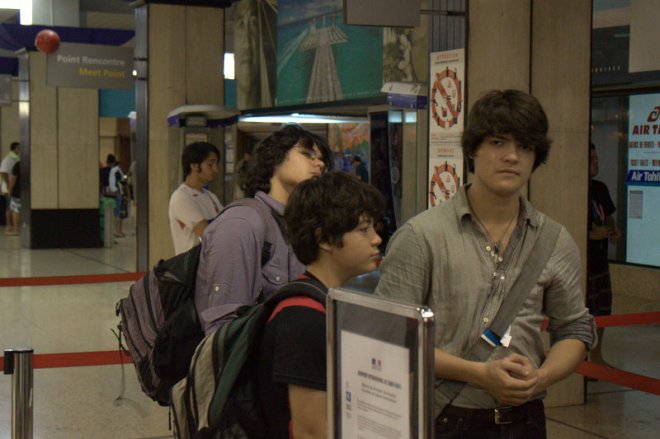 The only thing that salvaged the experience was this great group outside the international arrivals area, apparently waiting to serenade some homecoming friends. The woman with the guitar [sic] was particularly wonderful.

So, now it’s on to New Zealand. I think we’re all going to miss French Polynesia, having kind of gotten the hang of it by now. Another couple of weeks and I’d have had them all speaking a bit of French; Seven was well along and Matiu, who actually knows a little, was at least helping me translate the menus. We had even mastered a few words (of the hello, please, and thank you variety) of Tahitian. As for the bigger picture, I have been trying to ascertain what exactly I’ve learned but I think it’s going to be a while before I can process it all. On that point I was rather struck the other day by this passage in The Biographer’s Tale by A. S. Byatt:

“We see most clearly at a distance; details confuse us; we must get away from what we desire to judge; summer is best described on a winter day.”