Being in New Zealand is forcing me to confront all my missteps and another thing  I caught a surprising amount of flack for (this time from the urban literati) was my description in Come on Shore of a particular drink I used to have in the Far North as “what passes for coffee in New Zealand.” It was a kind of powdered instant that we drank with hot water and plenty of milk and sugar. I always enjoyed it-—I still do—I just didn’t think it resembled coffee very much.

Anyway, this clearly irked a segment of the NZ population, who will waste no time in telling you that the coffee served in New Zealand is the best in the world. Twenty years on (from the time I was describing) I would have to agree. We have had coffee everywhere and it has been unilaterally exceptional: huge cups of a great dark brew with beautiful foamy milk. So, clearly, that’s another line I’ll have to change in the second edition.

You know, I would never have been able to write that book if I’d been living in New Zealand—another illustration of the principle I mentioned in an earlier post about how we see things clearest at a distance. Working from memory can be exceptionally fruitful; it forces (or perhaps allows) you to tighten the focus, but, by the same token, it almost invariably has a warping effect—the natural consequence, I think, of selectivity.

Ok, enough philosophizing. I will leave you with one of my favorite pictures from the trip so far. I call it “Contemplation à deux.”

I think the kids were a bit relieved to land in New Zealand where, amazingly enough, everyone spoke English. I’m still impressed at my own failure to grasp how fundamental this difference is to one’s experience; but the other very obvious difference is that it feels like winter here. We are down in 36 degrees southern latitude now, not nearly as far as you can go and still be in Polynesia (the Chatham Islands off the coast of NZ lie on the 44th parallel), but still pretty far south. Of course, for those of you in New England, you can just forget the notion of “winter” altogether – think California, more or less. When the sun is out it’s warm (maybe in the high 60s?), even hot if you’re moving, but at night it drops down into the 40s, which for us at the moment feels pretty darn cold.

Abraham, who was last here when he was 7 (Matiu was not quite 2; Dani still in utero), finds it at once strange and familiar. He said he thought it looked like Australia, and I know what he means. It’s the flora, for starters, that gives one this antipodean feeling. It’s so unlike what we have at home — Norfolk pines, tree ferns, ti tree, manuka, all that olive colored bush — yet we are now clearly in a temperate climate and not in the tropics anymore. 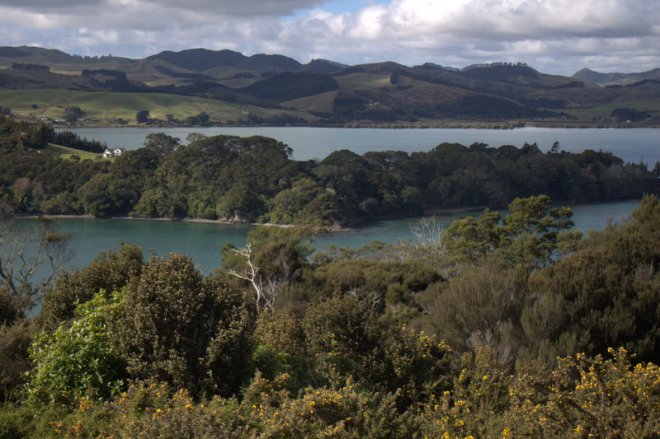 And then of course there is the ocean; even in the temperate zones the Pacific just does not resemble the Atlantic Ocean in any way, shape, or form. And especially not in color.

As soon as we got off the plane we headed for the Bay of Islands, stopping in Orewa (a seaside town a bit north of Auckland) for the best breakfast I think we’ve ever had (mind you, we’d been on the go for something like 18 hours with just one proper meal and not nearly enough sleep). I am compelled to list all the things we ate, just because it was so impressive:

Did we like it because it wasn’t — for the first time in weeks – hot cocoa, baguette with jam, and a runny omelette? Perhaps. But also to be fair it was extremely good. Even Dani – who has been surviving for three weeks on French fries, eggs, bread, pineapple, orange juice, and KitKat bars – got a full-on meal.

Here, courtesy of Abraham, is a photo of one of Australia/New Zealand’s true culinary delights:

Why don’t we have these in America?

But the other thing that is different about New Zealand is that we are not strangers here. Well, I’m still a bit of a stranger — having never actually lived her and only visited — and it’s all new to the children. But Seven is home — for the first time in 12 years. Which means that we have a lot of people to say hello to.

It’s funny about my French. If I say one or two words, even a short sentence, you could be deceived by my accent into thinking that I speak the language. But the minute I try to say something complex – or not even – the sorry truth is revealed.

This morning, for example, I’m quite sure that when I tried to tell the woman who was taking our laundry not to bother ironing it, I actually said that I never overtake (when driving). I can remember how to conjugate the oddest tenses (“I would have liked to have been asked…”) but I don’t know the most basic words for trash or outlet or receipt or anything, really.

My comprehension is a little better, though the Marquesans are sometimes hard for me to follow and the French speak too quickly until they grasp how useless I am. What often seems to happen is that I think I know what someone’s telling me — like that the road I’m looking for is at the end of the concrete — and then it turns it out that what they really said was that it was where the concrete started.

Seven, I should add, does not speak a word of French and cannot understand Marquesan, which is quite different from Maori. Still, he’s good value when we get off the beaten path. Everyone here is interested in where he comes from. He’s obviously not Tahitian (since he doesn’t speak French) and New Zealand, if you have a look at the map, is pretty darn far from here.

As for food, some of it is great, some of it is strange, some of it is really expensive, but the main issue is that for Dani virtually all of it is unrecognizable. I knew this would be a challenge for him. A Tongan acquaintance of mine recommends traveling with a jar of peanut butter (a death food from Matiu’s point of view, but perhaps we could just keep it away from his luggage…) and if Dani doesn’t start to experiment soon that may be where we end up. Our best find so far is a casse-croute from the truck on the side of the road: ham and some kind of soft cheese in a baguette for about $2. Everyone likes that.

The view from a lookout on the way to Hatiheu: 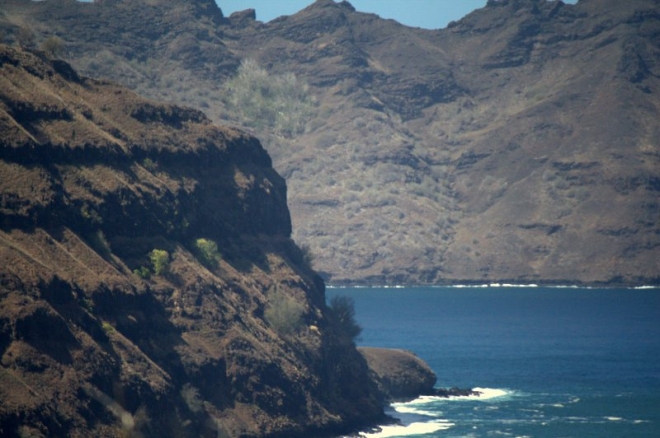 Me, resting, on the hike back up:

Seven, frolicking in the wave:

No wonder people are nicer to us when they see him….