…posting a few more shots from Rangiroa, because it’s so cool and so remote, and because I may never get there again and most people never will. Some of these photos were taken by Abraham and some by Seven; occasionally we discover that the same photo has been taken by both. Shall we start with flowers? 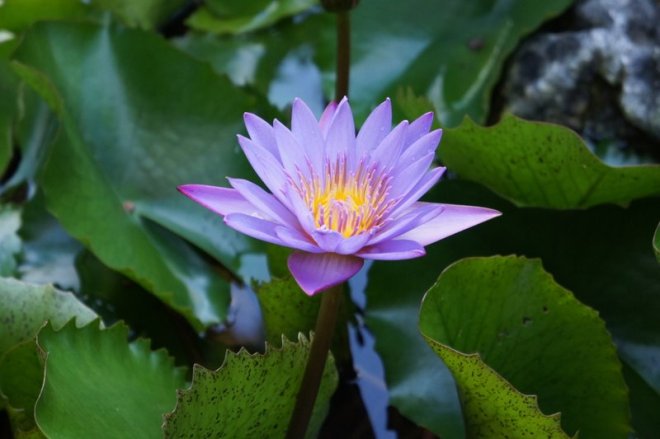 Now how about luggage? Note the addition of Abraham’s turquoise bag!

Here is a shot of the surf hitting the reef (the open ocean side of the atoll):

and here is one taken at Avatoru Pass. This is one end of the 12 km road:

Here is one of Abraham:

and here is one of Dani standing at the edge of the lagoon: 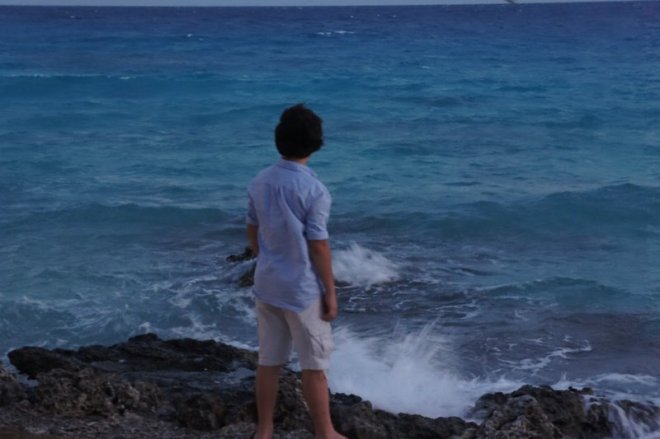 On our first night on Rangiroa, Seven and I were strolling along the road and I said, “So, what’s different about this place from all the other places we’ve been so far?” Answer: no mountains. The temperature is the same, the sea is the same, the plants are the same, even the sand is the same. But the mountains, which on a high volcanic island dominate one’s sense of the place (maybe even more than the ocean if that’s possible), are simply missing.

An atoll is, in effect, the memory of a volcanic island which has subsided into the sea leaving only its encircling reef. Here is a part of one from the air: 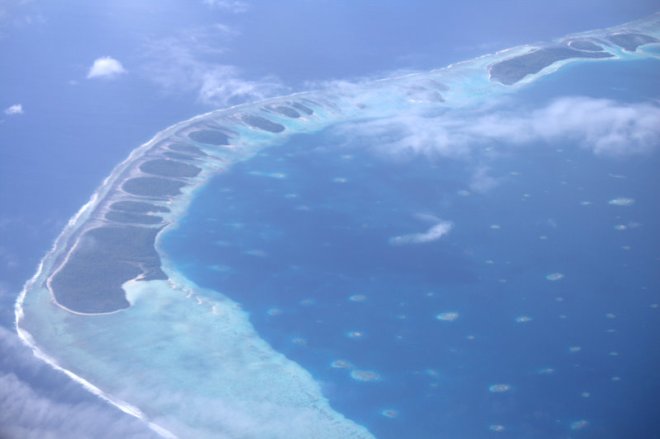 And here, btw, is what you land on.

The Tuamotu Archipelago is a string of coral rings running NW to SE about halfway between Tahiti and the Marquesas. Rangiroa is the largest of them; it is, in fact, so large that you could fit the entire island of Tahiti inside it, which means, of course, that you can’t see to the other side (or even close!) when you’re looking across the lagoon. What you can see across is the strip of sand that passes for the island. Here is a photo Seven took standing on the open ocean side and looking across at the lagoon. That’s how wide the island is — not very!

These rings are typically not continuous; they have breaks, or passes in them through which the lagoon empties and fills. On Rangiroa the town, airport, hotels, houses, etc., are spread out along a 12 km stretch of road (there are lots of cars, which seems insane, since there is nowhere to drive except up and down this stretch), at either end of which there is a break in the reef. At the Tiputa end, the pass is narrow and seemingly pretty deep and the water rips through it at the turn of the tide. It’s famous for the dolphins that come there to feed when the water flows out of the lagoon, bringing, presumably, lots of fish with it, and by some miracle Seven and I just happened to be there at the right time of day:

The whole time we were on Rangiroa the wind was blowing like crazy — nothing to stop it, I guess, for hundreds (thousands?) of miles, and the lagoon, which we faced from our bungalow, was almost as wild-looking as the open sea. Apparently this is typical of July — a strong, steady southeasterly. The boys did get one swim in off the jetty in front of the hotel, as you can see: 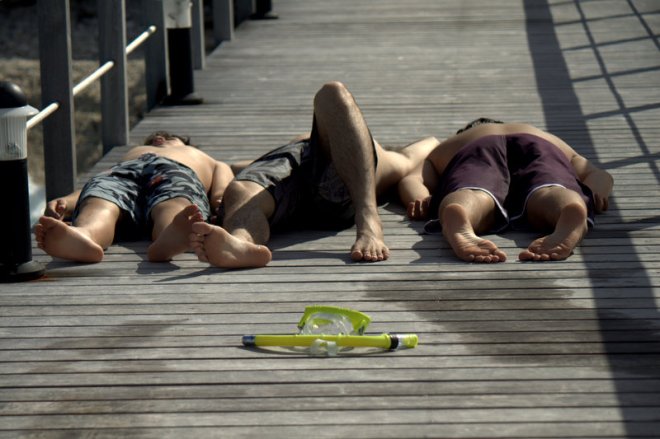 though it was so rough I could barely watch (Seven went with them, so that was ok). Apparently they saw lots of things — the Tuamotus are a famous destination for divers — but then when they came out of the water Seven spotted this sign:

He was the last one back to the bungalow and he came in laughing about how he’d seen this sign about a poison Tigerfish (!) and then he read about another kind of poison fish, and then another and another, and suddenly he thought, “Holy shit, they’re all poisonous!” I think it might have been the stonefish we saw in ‘Opunohu Bay that put the wind up him initially…

I am now going to leave you with my favorite Rangiroa picture. There is something about the arrival and departure of planes on these small islands — I remember the feeling from Rarotonga back in the 1980s when the plane only came once a week, and when you heard it go you knew it would be another 7 days before it came back for you. The planes are much more frequent everywhere now — there were certainly a couple a day on Rangiroa (even the odd private jet) — and yet there still seems to be something a little forlorn about the sight and (especially) the sound of them approaching and leaving these remote little specks of land…